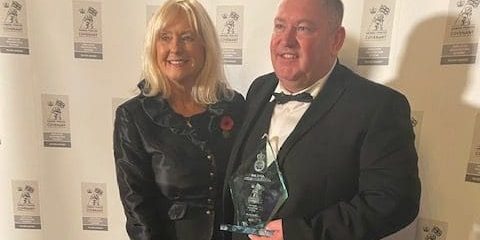 The Forshaw Group was delighted to receive its Silver Armed Forces Covenant award in a special ceremony last week.

Held at the historic Knowsley Hall on Wednesday 3 November, The Forshaw Group was one of 36 North West organisations to be awarded by the Ministry of Defence’s Employer Recognition Scheme (ERS), as a way to publicly thank and honour these companies for their support.

Lesley Martin- Wright, Chief Executive from the Knowsley Chamber, was also in attendance.

The start of the awards evening welcomed guests with a military brass band followed by an exceptional 3-course meal, with attendees receiving their accolades between courses.

With the nation marking Armistice Day today, Thursday 11 November, the timing of the event corresponded perfectly with celebrating the Armed Forces.

The Forshaw Group is committed to attaining the Gold Award status, which will recognise us as a national advocate, beyond our current Silver level which celebrates how we actively demonstrate our support at a local and regional level.

We continue to strive to provide the very best apprenticeships, training, and career opportunities for our serving and former men and women of the Armed Forces community, as well as training and employing Reservists and Cadet Force Adult Volunteers. We highly recommend other companies to do the same.